FLASHBACK to 2000 – OUR ISLAND IN THE SAHARA DESERT

Many of you have heard our story of how we spent 24 hours trapped on an “island” in the Sahara. For those who haven’t :– We were seven: Johnny + 4 on bikes, myself & my son of 12 in The Pig. Travelling from Merzouga to Ouzina we crossed rivers & saw our track in the chott (dry lakebed), filling with water. At one point the sky went orange. We took to the dunes. An early start to ride the 25kms across the higher dunes to our desert fuel stop at Remlia. There, two French guys (Honda XR400 & a Suzuki 650 that had probably never seen a mechanic & was way too big for him) asked to join us for the section to Zagora. After Remlia is the biggest dry lakebed fed by the 5 main rivers, full of fesh fesh (a very fine powder from pulverised mud) & camel grass bushes. There was a little water running in the first river we crossed. Then we were into the fesh-fesh tracks. The bikers went on ahead but were held up by the Suzuki rider who kept dropping his bike. His decompression lever was broken so that made it worse! On reaching the next river it was running too fast so they turned around & we all headed back to Remlia – very fast! I was seeing the water slowly making its way along my tracks, turning the fesh fesh back into mud. Sticky stuff! Arriving back at the first river it was now a raging torrent & impassible – so we found ourselves trapped in a ‘lake’ that hadn’t seen water for nearly 15 years & was fast filling up! Johnny told me to find a higher bit of land & get everyone up on it while he went back to rescue Mr Suzuki. Standing on the bonnet I saw just one rocky outcrop, so we set off & riding fast got to it before the water caught us. Johnny arrived with Mr Suzuki, & within 15 minutes we were totally surrounded by fast swirling muddy water. Our home for the next 24 hrs was approx 100m by 250m, & about 1m above the eventual water level. It’s a strange feeling alone on an impromptu desert island in a lake surrounded by mountains & dunes; with loud thunder, big lightning, but not a drop of rain. The result of huge storms far away in the High Atlas, we were caught in the flashflood! It was midday & the sun shone as we gazed at the expanse of water around us. We carried picnic stuff so all OK in the food dept. By sat phone the Zagora hotel was told we wouldn’t be arriving. Remlia was not visible but we exchanged torch flashes with them so they knew we were there. By 3 the sky was dark, the lightening was much worse & we felt that bikes & 4×4 made us very vulnerable for a hit on our island. We gathered wood, etc & had supper round the campfire. At night, myself & Niki wrapped up in a tarpaulin; 1biker in the cab; 2 inside the cargo area & Johnny & Ian lay fully kitted on the big rocks left hot after the fire. Next day we were all cold & damp. The waters had receded, but the rivers were still flowing. The guys went out wading, then with the bikes to see the conditions. The knack was to ride at full speed to keep the bike ‘floating’ on the mud & keep the wheels freed up. At midday we abandoned the Pig & the bikers rode to the river while I waded through 30cms of thick mud. Very painful between the toes! At the river we got the 5 bikes across by building rafts from inner tubes. We were met at the other side by the villagers who had made us a splendid meal. Soldiers were there & asked if I could go with them to the barracks at Taous to speak with the commander of the army in Rabat and assure him we were all OK. It turned out they had attempted to send a helicopter from Rabat to ‘save’ us but due to the storms it couldn’t get across the Atlas. We were reported on the TV news as ‘woman & child’ marooned on a desert island. The bikers rode to Ouarzazarte & continued their journeys home & Niki & I hitched a lift back there too. Just another day at the office! 🤔 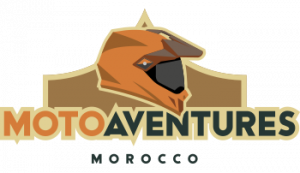